Praetoria, also known as Praetorian Earth, is a utopian alternate Earth, under the rule of Emperor Cole, who is known to the heroes of Primal Earth as Tyrant. Praetoria is the major focus of the Going Rogue expansion, providing an alternate leveling path for newly created characters. Its super-powered inhabitants are also the primary antagonists in content for high-level players using the Incarnate System (which requires an active subscription).

Praetoria is, in fact, a "mirror universe", where, unlike on our Earth, the most famous superbeings are twisted and evil, having given in to their darker sides, or at least to expediency over morality. While the official backgrounds provided in Going Rogue may largely be dismissed as propaganda, they do suggest that the previous "evil counterpart" stance is softening and that more of the Praetorian supers occupy a gray zone.

Praetoria refers to both the whole Praetorian Earth and also Praetoria City, Emperor Cole and Praetorian characters' home base.

New characters created by City of Heroes players have the option to start in Primal Earth or, with the purchase of Going Rogue, in Praetoria. While this decision is primarily cosmetic, it does have some minor effects on the character, and their dimension of origin can never be changed.

Differences between Primal and Praetorian player characters include the following:

The Portal Corporation refers to this dimension as Upsilon Beta 9-6, with the name Praetorian Earth assigned by Portal Corp technicians. This dimension was first discovered by Tina Macintyre due to invading forces by Anti-Matter. Several missions assigned by Tina Macintyre and Maria Jenkins take place there, and it is also the locale for the City of Heroes expansion: Going Rogue. The early press releases for the expansion were the first to refer to it as Praetoria. 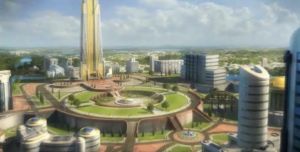 Praetoria as seen in the CoH: Going Rogue trailer 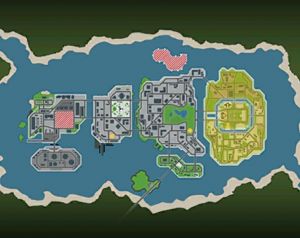 Map of the city of Praetoria

Praetoria, humankind's last and best chance for survival, shines like a beacon of hope across an embattled world. Emperor Cole established this stronghold to protect the lives of his people and to provide a safeguard in which to plan the defeat of humanity's greatest enemy. Though much was lost in the Hamidon Wars, both in lives and land, Emperor Cole built the capital of Praetoria into a safe haven where the citizens of the Empire can live in peace and prosperity. While the rest of the Empire struggles to meet its obligations to the Emperor for the safety he provides, the citizens of the capital city enjoy abundance, security, and opportunity so that their dreams, and the dreams of their Empire, can be realized.

Praetoria had its genesis in the ascension of Marcus Cole as the world's prime guardian. No one will ever forget how very close the human race came to annihilation in those dark years before Emperor Cole's rise to glory, or how the very earth itself turned against humanity at the command of the renegade scientist, Doctor Hamidon. The misguided leaders of the world sought to beat back the Devouring Earth with nuclear fire to no avail. Only through Emperor Cole's intervention was the world saved. In gratitude for his efforts, the people of the world chose him as their sole guardian, forever turning their backs on the archaic notions of nation-states or ethnic identities. From then on, they were citizens of the Empire--they were Praetorians.

The world's super-powered heroes united behind Cole and became his trusted lieutenants, his Praetors. These Praetors serve him and the people of Praetoria to this day. A flood of refugees flocked to Praetoria during the war to shelter under Cole's aegis for protection. In the stress of the burgeoning and downtrodden influx of population, the city swelled beyond the capacity of its limited infrastructure to support. Hemmed in on all sides by the enemy, Cole had one choice within this stronghold: Expand it or allow it to die. His decision to fight heralded the start of the Hamidon Wars, the wars to reclaim that which was lost in the land, mind, and spirit of humankind. With each victory, Marcus Cole's power and the dream for a safe and prosperous Praetoria expanded.

In the aftermath of the Hamidon Wars, it is hard to believe that humanity had devolved so far that simple electric power was a rare commodity. With the energy afforded by the invention of Praetor Keyes' powerful anti-matter reactor, the newly crowned Emperor Cole laid the foundation for the Imperial capital city of Praetoria, from which he would govern the efforts to reclaim all that humanity had lost. With so much devastation left in Hamidon's wake, Emperor Cole has invited the people to live safe and free in his utopian capital. From this shining paradise, he sends forays to reclaim the world, and he plans the return of humanity's primacy over the Earth.

There is no want or need in Praetoria. Basic necessities of life are provided for -- water, food, shelter. There is no manual labor. All of those tasks are performed by the Praetorian Clockwork which work and exist among the populace. There is neither crime nor discontent due to the Seers and Praetorian Guard on every corner. Due to the increased amount of leisure time available, the arts and sciences have greatly advanced to new levels.

Praetoria is the ultimate Meritocracy. You can choose not to do anything at all for a 'living' as everything is provided for you. But if you choose, you can advance in society to a position of power. If you can shoulder the burden for something, you are allowed to do so for as long as you are able.

War Walls are not widely used in Praetoria, although they can be found in some outdoor missions (such as on the Prevent Shadowhunter's Resurrection mission from Maria Jenkins). The borders between the Praetorian zones are invisible, and when a player character moves from one zone to the next, they will appear in the appropriate area on the edge of the next zone. The border around Praetoria as a whole, however, is protected by a Sonic Fence that is lethal to player characters.

Most of them have different costumes to wear in Praetoria than their Primal Earth couterparts. These new costumes carried over to various Hero-side missions related to the Praetorians, replacing their old costumes. Additionally, members of the Praetorian guard are known by other names on Praetoria. Tyrant, for example, is more well-known as the savior of mankind, Emperor Cole.

As heroes are turned into villains on this mirror world, some enemy groups are turned into heroic organizations - if they have not already been oppressed by the might of the Praetorians. Some are new groups entirely.

Defeating all of the Praetorian archvillains except Shadowhunter and Tyrant earns a hero the Dimensional Warder Badge.

Successfully completing the mission "Defeat Tyrant and his minions", earns a hero the admiration of Positron and awards the coveted Positron's Pal Badge.