First Ward was to be the seed from which the city of Praetoria would blossom, the first of the new cities in Marcus Cole's bright vision of the future. Built in the shadow of the bluff atop which sits the Mother of Mercy Psychiatric Hospital, First Ward was a picturesque city. From the towering Westerman Building and the surrounding skyscrapers that made up the city’s heart to the quiet neighborhoods of Eltentown and Mercyview, everything about First Ward said "home." It was even surrounded by the newest technology developed to turn back the rampaging Devouring Earth: sonic fencing. But this technology was a prototype, and it had flaws.

When the Devouring Earth came, the sonic fencing worked as designed. The tidal wave of Devouring Earth creatures--accompanied by mammoth Seeds that floated lazily above them--was held back. Had that been the extent of the attack, the defenders could have dispatched the creatures at their leisure. But Hamidon was clever.

Hamidon's true weapon had been lying in wait beneath First Ward, biding its time and testing the city's new defenses. When the real attack came, this weapon didn't thrash impotently against First Ward’s sonic fencing, it came up in the middle of the city. Great tentacles the width of jumbo jets erupted from the streets and tore into the buildings. The homes and business of the people of First Ward turned into a death trap as hundreds of tons of steel and concrete were pulled down upon the city's residents. Their city became their tomb, and its defenders, deployed along First Ward's perimeter, could only watch in horror as the city was destroyed from within.

The attack was Cole’s first no-win scenario as Emperor. Most of his aides informed him that nuclear weapons were the only answer. But one aide promised him another solution, one that would not kill everyone in the city and offered a chance for some to survive.

Praetor Keyes, inventor of the sonic fencing, had seen the flaw in his system and found a way to plug the hole. He would turn the sonic fencing in on the city, causing a catastrophic frequency loop. This solution would leave everything in the center of the city dead, but unlike nuclear weapons, it offered a chance of survival to those outside of the city’s center. Cole approved the operation.

No records remain of what happened next. What is known to the average Praetorian citizen is that the Devouring Earth attack was stopped and that, save for the Mother of Mercy Psychiatric Hospital, the rest of the city was categorized indefinitely as a disaster area. Although a few survivors were relocated to Neutropolis, tens of thousands were dead or missing. Others were quarantined due to exposure to Tellurian Plague, a fatal disease transmitted by close proximity to the Devouring Earth.

But First Ward is more than a ruin with a tragic history. Those who know Cole's secrets know that this is a place where the barrier between this world and the next is stretched thin, where the spirits of the dead walk among the living, and where magic, not nature, is the most powerful force. It is a abandoned, forgotten place, and a home for those who are now forgotten and abandoned.

First Ward was to be the seed from which the city of Praetoria would blossom. Fate, it seems, has other plans.

Requires a VIP subscription. or

Zone Event: The Seed of Hamidon

Main Article: The Seed of Hamidon 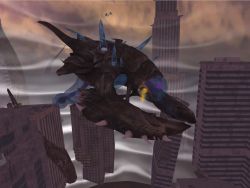 The Seed of Hamidon roams the warped skies of First Ward. This giant flying monster was dispatched by Hamidon to infest First Ward and transform it into a haven for the Devouring Earth. Face off against the Seed of Hamidon during massive zone events, earning rare rewards if you defeat it.

All 10 The Last Word plaques