Paragon City is the setting of City of Heroes. It is a fictional city located in the state of Rhode Island in the United States. 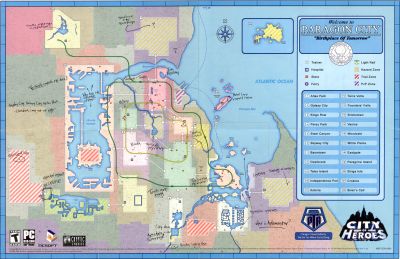 Map of Paragon City included with the Good Versus Evil Edition.

Before the Rikti War, Paragon City was one of the largest and most prosperous cities in the world. The Rikti, however, used the City as their center of operations and devastated it in the process. Paragon City has since resurrected itself from the ashes, but has not yet reached the heights of prosperity it knew before war. Many parts of the city remain uninhabitable and dangerous; Paragon City needs a new generation of heroes to take the place of the many champions who perished fighting the Rikti.

To prepare for any further Rikti attacks, humanity adopted one of the alien invaders' key technologies: War Walls. The Rikti utilized force fields to protect their installations and bases from assault. After the war, human scientists managed to master this technology and make Paragon City the first to use Rikti technology for civil defense. Each zone of the city is surrounded by gigantic walls that house and protect the forcefield generators. As long as the War Walls are intact, they generate a powerful blue wall of energy that prevents anything from getting in or out. These War Walls have been successful in both guarding the city from outside attack and quarantining unsafe zones.

The City is divided into three basic types of zones. The first, and most common, is the City Zone. The authorities have determined that these locations are relatively safe for human habitation. City zones were mostly spared from the harsh depredations of the Rikti and the devastating effects of street to street combat. The current City Zones required relatively little work to get them up and running again. Today, they are the 'real' Paragon City; the living, breathing parts that keep the great metropolis going. Citizens and heroes alike can get from zone to zone either by foot or monorail and the hospitals are always open for any hero who needs treatment. Despite all these signs of normalcy, crime remains a big problem even here. Without protectors, Paragon City remains easy prey to various villainous predators.

The second type of zone is the Hazard Zone. These territories are so dangerous that few people dare to live in them. Villains have infested Hazard Zones to the point that they are now uninhabitable. The authorities lack the strength to clean them out and require superhuman assistance to make the areas safe again. Even a single hero is capable of doing some good in a Hazard Zone. Authorities, however, have created a system to prevent fledgling heroes from getting into situations beyond their capabilities. Each hero must prove himself and achieve a certain minimum Security Level before he can enter a Hazard Zone.

The third type of area that exists is the Trial Zone. Much like Hazard Zones, these territories are so dangerous that no sane person inhabits them. However, unlike Hazard Zones, heroes should not venture far into the Trial Zones alone. In order to survive, heroes must work together to fight the evil forces that dwell within these areas. These zones have been dubbed 'trials' because each has challenges that require constant effort and endurance. Since each zone presents a unique challenge in a hero's development, the heroes and citizens have dubbed these areas "trials." In essence, they are points that define a hero's progress from fledgling hero into a true champion of the city. Like Hazard Zones, Trial Zones require heroes to reach a certain Security Level before they may enter - and the Trials themselves have further requirements to prevent the unprepared hero from being overwhelmed.

One of the most exciting aspects of City of Villains was the addition of "player versus player" zones. Villains can't run into Paragon City proper and start smashing new heroes, and vice-versa. Such actions are only tolerated in one of three crossover "PVP zones". (There are rumors of a 4th PvP zone for those villains who most please Lord Recluse - and of course the heroes who oppose them.)

These zones are located within or near Paragon City, and are deemed safe for residential use:

These zones exist within the Paragon City area, but are still recovering from the effects of the Rikti War or other catastrophes:

These zones are where battles between Arachnos and Longbow take place:

Most, if not all of the famous Paragon places are related to heroes present and past: