This article is about the villain Strike Force. For the hero Task Force, see Mender Silos Task Force.

This Strike Force can be completed solo, but due to the difficulty, a team is recommended.

Unlike normal Task Forces, Archvillains/Heros will spawn as Elite Bosses according to Notoriety and number of players in the team.

Mender Silos is found inside the building in Ouroboros, up the stairs.

Agree to form a Strike Force

It might be hard to believe that there was a time when Lord Recluse stood at the precipice of taking over Paragon City. As is so often the case, he and his 'patrons' failed in their mission due to the supposed heroes of your time. I propose a pronunciamento to you, one who is not so terrified of the taboo, that perhaps Recluse should have succeeded. Not just for his gains or even all of the Rogue Isles, no it's much bigger than that. For mankind to survive the 'coming storm', Lord Recluse must rule the world.

Note: This series of mission is recommended for group play. You're welcome to try it as a solo player, but it'll be tough. Consider yourself warned and good luck either way.

I'll send you back in time, insert you into the Arachnos and guide you through it all. Our goal is to make sure Lord Recluse succeeds this time.

The first step is for you to track down a mendacious man I believe to be at the root of this. Seek him out and aid him if he'll take it. He is at the fulcrum of these events and you may very well be right at his side, Character.

You need to find your way through the portal and into the life of Arachnos past. It's not far back, you may even see yourself if you were a part of them in that 'then'.

But that is not important. What is important is that you look for the man at the root of this struggle. He will be at Siren's Call... waiting for you.

You've escorted Manticore to the Arachnos flyer. From here on out, it'll be Lord Recluse who determines what to do with him.

Well done, Character. Are you wondering why you aren't seeing the changes in the time stream. You wouldn't, not yet. I however can. You are a rock rising out of the stream with all of possibility flowing around you.

Before you leave, I want you to be aware of my gratitude.

You don't have to hide your thoughts from me. I can see them all over your face. You don't believe Manticore would turn against his kind. Very well, I have just the place for you to go next. You will see who Manticore is willing to become.

Recluse made a proposal to Manticore: take out Sister Psyche. If you had difficulty believing Manticore would turn on his own, you'll likely find this even harder to believe. So, go back in time and see what this man who claims to be a hero did and then tell me, is it the actions or the intention behind them that makes us heroes or villains ?

You need to go with Manticore and help him take out Sister Psyche. Or, if he changes his mind, be there to witness what he does. The Arachnos will believe that you are working for Lord Recluse directly. They will give you no cause for worry.

Sister Psyche has infiltrated Arachnos. Be warned, things might not be what they seem.

Well done. You've captured Sister Psyche. Now Lord Recluse will use her to power his Jade Spider. This of course, will kill her, nothing I'm sure you're too worried about. However, her death may well be what saves the world. I apologize if you find this mission morally ambiguous.

Lazarus was right about you. We did come to the correct time.

The time has come. Recluse has made his assault on Siren's Call. From there he will sweep across Paragon and then the world. If my hypothesis is true, then he will succeed and in his success, he will actually save the world from annihilation.

Siren's Call will be the staging ground for the Arachnos assault. You must go there and aid Lord Recluse's army. There will be many trying to stop you, but you must succeed.

Go to Siren's Call. Take down the Longbow and defeat every hero there.

The time has come for Lord Recluse to take his rightful place as ruler of the world. Here, in Siren's Call, is where it all begins.

You've managed to destroy the Freedom Phalanx as well as the Vindicators. Siren's Call is now in the hands of Arachnos. 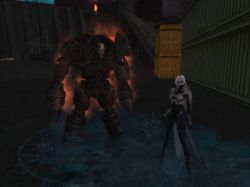 Note: Though Ghost Widow and Black Scorpion are presented as Archvillains, they are more like bosses. 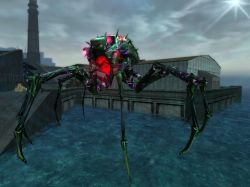 You've managed to alter the timeline so that Lord Recluse overtook Siren's Call. From there, he will be able to siege Paragon City. There will be resistance of course, but all the major powers have been taken out thanks to you.

The causality curve should catch up to our own time like a wave. However, I must tell you, do not expect a tsunami to wash across us. There are too many other factors from then to now that could push the time back to when it was. Time is a difficult thing to change, often taking numerous alterations to make even a minor adjustment in the future.

This is why I have chosen to bring Ouroboros here rather than some when else. Lazarus and I have determined that this is the strongest temporal node with the potential for greatest alterations, but as with everything else, only time will tell.

The hero known as Manticore has always walked a line between the light and the dark. On this day, he crossed it, joining Recluse and the rest of the villains to take down the Freedom Phalanx. However, his betrayal was not to the heroes but to the villains.

You aided him in his battle against the Vindicators, bringing him into the fold of Arachnos. You were even there when he brought down Sister Psyche. With the way he coldly went after her, no one say he was 'faking' it.

Yet, when the moment of truth came and Lord Recluse began his assault on Siren's Call, Manticore turned on you. Regretfully for him, his betrayal was too late. The Jade Spider performed perfectly, mentally commanding all those opposing to join Arachnos. The Phalanx and Vindicators were taken down. Even Manticore was made to pay for his double cross.

Lord Recluse was able to begin his true siege of Paragon City. You sit back in your own time and wait for what the Ouroboros call the causality curve to catch up to now.

Unlike the larger Strike Forces, "Trading Places" is more like a Story Arc, and can be completed in about an hour. Consequently, it has no accomplishment badge, and offers only 5 Reward Merits.