From City of Heroes: Rebirth Wiki
(Redirected from Rogue Islands)
Jump to navigation Jump to search 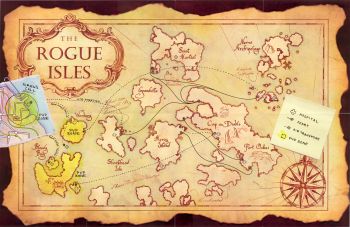 All of the following has been copied from the City of Villains Official Site: [1])

The Rogue Isles is the setting of City of Villains. It is a fictional group of islands off the coast of the United States and the base of operations of Lord Recluse and his Arachnos organization.

Geographically, the Rogue Isles are a small chain of islands NW of Bermuda that run in a band 50 to 20 miles off the coast of the US. Officially known as the Etoile Islands, there are dozens of islands in the chain. The main cluster of the group, home to Spider City, is at the 50 mile marker, outside US. jurisdiction. From there the smaller islands string toward the US coast.

Centuries ago, the islands were discovered by a French secret sect, the Children of Enos, fleeing from France and blown off course sailing to the New World. There they found fragments of strange ruins that hinted at an older and darker history. The sect quickly enslaved the small native population (and supposedly overcame the spirit-guardians of the natives) and put them to work building a magnificent gothic temple/fortress over the mysterious ruins. The base thrived for many decades and became the sect’s main headquarters. From here they conducted their dark plots against their hated enemies in France and the Church.

During the French & Indian War period, the islands became home to a number of settlers. At first, the French used the islands to house prisoners or for barracks for their soldiers and sailors. By 1756, thousands of settlers fleeing both Europe and the Americas came to the island to avoid the French and Indian / Seven Years War.

A decade later, the people of the Rogue Isles rebelled and claimed independence. In a move that stunned the French authorities, the Rogue Islanders signed a treaty of protection with England and effectively ended France’s claim.

And so the Rogue Isles became a haven, first for English privateers against the French, then privateers in general, and eventually for any pirate who was willing to pay the Gouverneur (the head of state). Close to the Americas, pirate trade and smuggling became the principal industries of the islands. The gouverneurs played a careful political game with one eye blind to the pirates while the other was perfectly willing to watch the hanging of an “example” – captains and crews whose deaths would satisfy an indignant England, France or Spain. With England as their original protector but French blood in their veins, the islands essentially became neutral, making whatever deal or agreement best left them to their own devices.

As the great age of piracy waned, the Enos regained strength. In 1810, the scattered survivors of the sect returned and revived their practices, though far more secretly. Using their esoteric skills they quickly moved into positions of power. It seemed there was no dark secret they couldn’t uncover or weak mind they could not dominate. In their hands, knowledge truly was power.

It is perhaps fortunate for the rest of the world that disaster struck before the Children of Enos could turn their attention to the outside world. On April 3 rd, 1833 an eruption shattered the nighttime calm. Over the course of the next few weeks, the previously un-volcanic main island of Grandville recoiled from ash, thunder, and fire as a mountain grew where none had been before. When it was all done, much of the old city was half-buried in ash. Lava flows had destroyed farmland and choked the harbor. Even more dramatic, Grandville was broken into four islands now known as Cap au Diable, Port Oakes, Bloody Bay, and Grandville.

With the harbor half-choked and many of the island’s elites dead or fled, the islands sank into poverty and squalor. During the Civil War a small fleet of Confederate blockade-runners passed through the remains of the port, but other than that little changed in the Rogue Isles for almost 70 years.

20th Century and Beyond

When Statesman appeared in Paragon City, many of the villains there decided they needed a new home. The Rogue Isles was an obvious choice. Many already had connections there and the little nation’s “friendly” attitude made it a perfect choice. President Oakes was no fool. He knew that if he resisted these newcomers with their gangs and occasional superpowers things would not turn out well. But at the same time, he had bargaining chips – citizenship, diplomatic immunity, and other protections from American justice. And he had friends in the high places of America who were happy with the Rogue Isles just as they were. Deals were struck – in exchange for “playing nice” and taxes, the government turned a blind eye – and the Rogue Isles became a haven for the super-powered and evil.

During this time the first of many Arachnos cells arrived in the Rogue Isles. Representing itself as just another villain organization needing protection, the team quickly set up a base for its operations in the US. Avoiding spectacular raids and sabotage, it devoted most of its effort to intelligence gathering and influencing American policy. Lord Recluse did not overlook the Arachnos cell when he assumed control of the organization itself. Recognizing the value of a base so close to the US, he placed trusted agents (as much as Recluse trusted anyone) in charge and violently purged those he perceived to be troublesome. Once this was done, he ordered the station to go underground for the coming storm. This caution paid off when World War II broke out. President Marchand (Oakes’ “elected” predecessor) officially declared the Rogue Isles neutral, albeit with Allied leanings. When the 5th Column menace alarmed the US, Marchand’s army waged a visible “war” on Column members on the islands, just to placate the Allies. It was Arachnos’ lower profile that allowed it to survive relatively unharmed.

And then Lord Recluse vanished – but even while the rest of Arachnos slid into turmoil, the hidden cell continued toward some unknown goal. Secret projects were started. Politicians were bought, rivals brought down. Men – and villains – were recruited. Someone was giving orders, but no one knew who.

It wasn’t until the mid-1950’s that it became publicly known that Lord Recluse was calling the shots. At that point he was ready to make his move. He performed a military coup, declared the Rogue Isles under the dominion of Arachnos and began to shape his empire.

The Rogue Isles today are a land of opportunity for those with the ambition and villainy to seize the chances that come by. Lord Recluse tolerates the ambitions of others – to a point. Anyone willing to follow his laws, pay his “taxes” and accept his justice without question is welcome to Spider City. So long as you don’t threaten his plans, you can make schemes of your own. What does he care if a shipment of artifacts for the Circle of Thorns is stolen from the docks? Nothing – so long as the thieves are not so brash as to use them against Arachnos. If you can rob a bank and escape his security forces, then is it a good test of your skill – but rob too many banks, create too much havoc and the Wolfspiders will hunt you down. He tolerates ambition, but not anarchy.

In this setting Arachnos trains and plots. Heroes make occasional forays to bring back their man and there are others who aren’t above hiring local talent for bounty hunter work. Freedom Corps members sometimes show up just to make trouble. And there are always plots and schemes between the various factions.

These zones are located within the Rogue Isles.

Though not part of the Rogue Isles, these zones are closely related to them in one way or another. Despite their geographical location, all of them are part of City of Villains.

The first zone a villain wannabe will see is the infamous Zigursky Prison, in the very heart of Paragon City.

In order for villains to gain access to the Essence of the Earth, these islands may be accessed via submarine from the Rogue Isles.

Actually part of Paragon City, this nuclearly devastated neighborhood is being rebuilt, but the reconstruction efforts have been stopped by the constant attack of Arachnos. Longbow and Arachnos clash here frequently in great numbers for the control of the zone, with no clear winner so far.

Lord Recluse forced kidnapped portal technicians to create a Destiny Portal capable of sending subjects to alternate, and potentially existant, futures. Finding one time thread in which Paragon City was successfully taken over by Arachnos, Lord Recluse sent in forces with Temporal Anchors to secure the time stream and guarantee that future to be the one that will actually occur. The scientists escaped back to Paragon City, and now Longbow has created a second Destiny Portal to combat Arachnos and ensure his victory never occurs. With each defeat and victory, the future moves one step closer to reality. Who will end this war of the ages? Only time will tell...