The Deadly Apocalypse is a type of zone invasion introduced in the Halloween Event of 2009. Haunting Banners representing iconic horrors appear in a zone and are protected by foes that embody that banner's horror. Players must attack the defenders and then the Banners and then finally a Giant Monster.

During the Halloween event, the Deadly Apocalypse occurs in most normal Paragon City and Rogue Isles zones on a semi-random schedule. It also has a chance to happen outside of the Halloween event whenever a player turns in Halloween Salvage for an extra costume slot.

Order of the Event

The following text announces the beginning of the event in the Hero or Villain Event channels:

When the event has ended, the following text will appear in the appropriate Event channel: 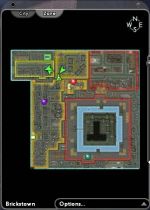 When the warning has been issued in the Event Channel, the zone in question goes through these changes:

A minute later the four Banners spawn marked on the mini-map with red, blue, green, and purple dot-icons. The location of the banners is (apparently) random among a set of dev-selected possible spawn points.

When a player is near a banner, their GUI is taken over and they see in the Nav Window:

Once the Banners appear, players have four minutes to continue to form teams and organize themselves at the four Banners. When the countdown hits the 16:00 mark, then foes start appearing at the Banners.

The Goal is to destroy the four Banners and the Giant Monster. But the Banners are not targetable until a certain number of their Defenders are defeated. When the countdown of the event hits the sixteen minute mark, the Defenders start appearing. The Defenders at all four banners must be defeated simultaneously -- fighting at just one Banner in the zone has no effect.

The red bar in the Nav Window shows the progress of the players in defeating the Defenders as it turns progressively blue if the players are defeating enough Defenders. When the bar is fully blue, it disappears and now the Banners are targetable and can be destroyed.

The official website announcing this event warns that there may be Elite Bosses among the Defenders. This is not to be interpreted that only the EBs are the true Defenders. Any foes that spawn are Defenders and defeating them makes the Banners eventually vulnerable to attack.

While the Banners are being attacked, Defenders continue to spawn. Also, the Banner may develop one to four buffs represented by glyphs that appear in the four circles of the graphic runes surrounding the Banner. These glyphs buff the banner or their Defenders.

The Banners have over 43,000 hit points each. If only one or two teams are participating in the event, they may find that they need to all gather at the same Banner in order to destroy them in time.

Once all four Banners have been destroyed, a Giant Monster representing a Greater Mystic Aspect of one of the horrors of the Banners will appear in the zone. The Nav Window will show the players how far the are from the GM so they can zone-in on it.

The event ends when the Giant Monster is defeated, or when the countdown has reached zero, whichever comes first.

"There is no fury more intense than that of a woman scorned, and The Banner of Scorn has conjured manifestations of wronged women with a bone to pick. They seek eternal revenge for the horrible things that society, and life in general, has inflicted upon them."

"The depraved ugliness festering in the underbelly of humanity is called forth at The Banner of Fiends. These Dark Fiends are a physical manifestation of pure malice, seeking calculated cruelty and malevolence, just because they can."

"These phantasms are actually manifestations of humanity's fears come to life. At the Banner of Transparent Terrors, they seek to inflict unimaginable terror upon their victims and as long as the Banner of Terror persists, these parasites will feed off of the fear of others."

"Humanity's dark desire for mindless mayhem and destruction have been channeled by the Banner of Mayhem. The results are these creatures that are fueled by the need to blindly destroy everything around them."

"These horrible creatures are a mere fragment of the wicked Greater Mystic Aspect. Small as they might be they still pose a terrible threat."

"The malevolent mystic banners have released their energies to form the Greater Mystic Aspect. This colossal entity represents all of the negative aspects of humanity coalesced into physical form."

These badges are awarded for defeating the four Haunting Banners and the Greater Mystic Aspect (Giant Monster). The accolade is for having all five of these badges.

Defeating the Greater Mystic Aspect allows you to choose from several rewards including four new temporary powers, a random medium inspiration, and an All Hallows Eve Super Pack.

When a player clicks on the information graphic in the Nav Window (the letter 'i' in a bang graphic), they will see this information:

When the Circle of Thorns secretly began linking their magical energy in an effort to make them more powerful, experimenting with ways to extract the power from other magical groups, they inadvertently put into play an event that would change the magical landscape forever. During a series of incantations, with the use of extensive symbols and magical rites, they formed Banners that could summon the 'aspect' of nearly any entity, alive or dead, to be used as a mindless slave in any way the Circle wished. While they could not actually summon the true entity, a piece was certainly enough for their purposes.

At first, they were delighted with their success, imagining a multitude of uses for this new type of slave: more bodies to use as an army, return fallen Thorns to battle, use the entities of other groups as assassins: the possibilities were endless. Unfortunately, the ritual on All Hallows Eve didn't go as planned. The Banners they summoned behaved independently of the Circle's will, summoning Defenders who would not to obey their commands. Worse, they discovered that while these 'haunted' Banners were active, Glyphs appeared one after another, making it more and more difficult to banish them and that as the closer they came to the Banner, their once nearly infinite well of power reversed on itself and made them weaker. They disappeared into the night, leaving the mess for others to clean up, not realizing that an even greater threat had manifested itself.

The Haunting Banners are surrounded by powerful magical barriers, initially rendering them invulnerable. As you defeat Defenders, the red progress bar will begin to change as blue appears, signaling that the Banners are becoming vulnerable. Once the Banners are vulnerable, they focus energy and grow stronger, indicated by one or more glyphs that 'activate' as needed to protect the Banner.

As each Banner is defeated, the Event UI icon 'blacks out' and also disappears from the MiniMap. If all four Banners are defeated in time, a Greater Mystic Aspect appears. The UI changes when this happens and shows the distance to the Aspect.

Macros are made available to bring a multitude of teams together for events. In this event it will help with teamwork of multiple teams and completing in a timely manner.