The Lady Grey Task Force is a co-operative Task Force that allows heroes and villains to team together. The task force was added in Issue 10 with the redesign of the Rikti War Zone.

Agree to form a Task Force

The Rikti, under the command of their War Leader Hro'Dtohz, grow desperate. Valiant efforts by Vanguard forces have destabilized their new gateway to the Rikti Homeworld, but already they look for methods to recover from this set-back.

The Dark Watcher informs us the Rikti Lineage of War believe they can utilize latent human psychic energies to re-stabilize their portals. The Lineage of War forces have captured one of the most potent psychics on earth in order to do so: Miss Penelope Yin.

Those who have worked in the Faultline zone no doubt remember Miss Yin well. The Rikti were attempting to secret her back to their ship when we were able to pin them down en-route, but her rescue will require expert talents. Her safety now rests on your shoulders.

Task Force code-names were one of Our organizational techniques we first used during the Rikti War. It pleases us that they have continued, and it is our honor to grant you the code-name Task Force Name.

You must bring Miss Yin to safety. Her father is over-wrought with worry.

Vanguard scouts report the Rikti still have Penelope here. They also report that there has been strange, unknown activity.

You have rescued Penelope Yin and defeated the Clockwork King. Return to Lady Grey for further instructions. 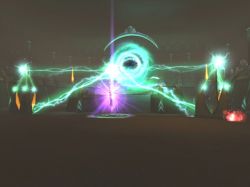 We must commend your excellent work! Through your most magnificent skill in battle the Invader's plans have been disrupted, and Miss Yin is safe once more, but let us not grow complacent. This was only the opening play of the Rikti's plan. The struggle has only begun, but We feel confident that with your aid, we shall prevail!

Your performance has been beyond admirable. However, there is still much that must be accomplished.

We have learned that despite the loss of Miss Yin, the Rikti Lineage of War is using the power of other captured psychics to stabilize gateways to their homeworld. While our agents search for the installation responsible, we cannot sit idly by.

For we have learned that four of the Rikti's most fearsome warriors ride across the dimensional barrier.

They must be repulsed, and We must ask you to do it!

The four warriors are known as The Riders. Fortunately, Vanguard forces have pinpointed the location of the dimensional portals.

Your objective shall be to destroy these portals, and defeat any of these Riders that have made it into our world.

The Riders are feared even by their fellows within the Rikti Lineage of War. Truly, they must be abominable individuals.

Without Penelope's power, the Rikti have had to open their portals where ever they can get a stable pathway

You have held the Riders back! Return to Lady Grey for further instructions.

Your magnificent triumph this day has granted a great reprieve for all.

Our agents have found the location of the captured psychics. The Rikti Lineage of War holds them against their will. We must strike now, Task Force Name!

The Rikti have been kidnapping latent human psychics in order to utilize their energies to re-stabilize the portal between our world and their own.

They must be prevented in this, for if they should succeed they will be able to muster the full force of their military might against us. Now is the time to stop this plan before it may grow bitter fruit by recovering the captured psychics!

Our scouts have located the lair where the foes makes these infernal studies. Your objective shall be to infiltrate this location, recover the captured psychics, and terminate the studies of the Lineage of War's Chief Researcher in this field, a former human now known as Dra'Gon.

Be vigilant, do not allow harm to come to your charges, and know that Our hopes go with you!

You are to recover all of those you can, and undo the work of this 'Dragon' fellow. If 2 or more of your charges fall, it shall be a dark day indeed. 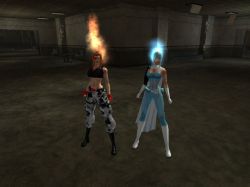 You can feel the alien energies of unnatural science at work

You have defeated Dra'Gon and rescued the captives! Return to Lady Grey for further instructions.

You have performed more than just a great victory today, but indeed, you have brought forth a triumph! The return of members of the Omega Team, and the information they carry is being analyzed already. We are, of course, using all resources at our disposal to ensure that this is no deception.

However, despite your victories, the Rikti have not ceased their machinations and we have learned from Miss Yin's precognitions that the Invaders will soon begin an even more desperate and nefarious operation!

Your courage and daring have carried the day time and again, yet the great work is not over. Indeed, the most difficult tasks may yet be to come.

LADY GREY TASKFORCE: 'The Beast and the Sea'
Part: Four

Miss Yin, whom you may remember, has foreseen that the Rikti plan one last desperate gamble to stabilize the gateway between our world, that they might flood the full power of their armed forces through once more.

Your goal shall be two-fold. Firstly, you are to defeat the Rikti, and destroy the Power Spires they are using to transmit the Hamidon's energy back to their ship.

Secondly, once the spires are down you must defeat the Hamidon in its weakened state. The power you harvest from it could be needed to tip a crucial balance should the worst come to pass...

Once the Rikti are dealt with, the Hamidon should still be weakened. You should stand a decent chance at defeating it.

You exit the chopper on the edge of the Abyss, the hole in the sea where the Hamidon rips through into our reality.

You stopped the Rikti and took the power of the Hamidon. You can only hope it was in time. Return to Lady Grey for further instructions.

Upon completing this mission, the team leader will be granted the Hamidon Essence temporary power.

You have succeeded, yet we are on the brink of absolute failure.

The Rikti Lineage of War will not be able to stabilize the portal long enough to bring through the mass of their forces, yet their alternate plan could devastate us all even more thoroughly than a fleet of their mother-ships.

The Omega Team risked everything to warn us of it and now we are on the verge of facing... The Honoree.

The Rikti are preparing to open a single gateway long enough to bring forth The Honoree. If they should succeed, they will bring the most powerful warrior they have at their disposal directly into our dimension.

This cannot be allowed! Thus, I charge you, Task Force Name, in the name of the Vanguard and all the peoples of Earth, to stop the Rikti!

You will have three tasks ahead of you:

Firstly, you must defeat Hro'Dtohz, the Lord of the Rikti Lineage of War. He will be on-site overseeing the portal's activation.

Secondly, you must destroy the portal generators that keep the portal stable. Doing so will ruin all of their work and destabilize the conduit between worlds once more.

Finally, if the worst should happen, and The Honoree should reach our world, you must defeat him. I can tell you no more, for it is our hope that it shall not come to pass. If it does not, you need know no more. If it does, you will understand my recalcitrance. Should the need arise, we have prepared the power of the Hamidon into a form that should help against him. Pray you need not use it.

You know your objectives. There is little use left in discussion when action must be taken. Good luck upon you all. Your bravery has been truly inspirational.

The Rikti have spent a great deal of effort building this portal chamber beneath their ship. Time to make sure it doesn't pay off!

You have stopped the Rikti's plans for now. Return to Lady Grey for further instructions.

So, it was true. The Rikti's Honoree was our own Hero 1, taken from us, transformed, and mind-controller by the Invader.

Let us not mourn for his fall, for even with all the alien science bent to break his will, he fought to retain some of his humanity. Perhaps one day, he can be restored. If that day comes, it will be because of your bravery and valor.

Though tinged with sorrow, this is indeed a moment of triumph, your moment of triumph. For you have fought against all odds and saved all of us, and may now stand with your heads held high amongst your peers, here in this City of Heroes.

Penelope Yin has a way of getting herself into trouble. The Rikti kidnapped her and sought to use her immense psychic abilities like a battery to charge a portal home. You found her, suspended in the air, her 'gift' being drained out of her. But you weren't the only one who came to save her. The Clockwork King came to rescue his little clockwork princess and now YOU were the enemy.

The Rikti did not stop with Miss Yin's capture. Other psychics were taken and used to open a portal to the Rikti Homeworld. Four warriors came through before the portal closed. These Four Riders were ready to bring War, Famine, Pestilence and Death to our world.

Two members of the Omega Team have returned! Glacia and Infernia are once again reunited with friends and family. The reports they bring back from the other world are intriguing, to say the least. The fact that even some of the fifty man team is still alive over there, fighting the good fight, gives you a little more hope. If only they had news of the Omega Team's leader, Hero 1.

The Rikti will stop at nothing to establish a portal home, attempting to harness the hazardous power of the Hamidon as a means to tear a hole into their world. These beings truly are alien to us. However, it was Penelope Yin's vision that guided you there. You needed to not only stop the Rikti but to mirror their intent, harnessing the Hamidon to save the world... or die trying.

Under the Crash Site, two worlds clash. Hro'Dtohz, the Lord of War, rallied his troops for combat. His technicians prepared to bring forth a single individual: The Honoree. You were stunned to discover that the Honoree was in fact, Hero 1, leader of the Omega Team. He'd been corrupted by Rikti genetic manipulation and mental reconstruction on a level no human could resist. As you fought Honoree, you noticed his humanity desperately struggling to escape its Rikti prison. He succeeded, briefly, and in that moment pleaded for your help. He begged you to stop him to save the world. In the end, you granted his wish, but the victory proved a bitter taste in your mouth. Long ago, Hero 1 made the ultimate sacrifice to stop the first Rikti invasion. Thanks to you, his memory won't be tarnished by being a part of the second.

Today, you mourn a Hero.