The Players' Guide to the Cities/User Interface

This appears to need more content, or a clarification that it is just a table of contents for other articles. It appears, however, that there is very little about the UI here.

There are several windows that you may display in your user interface that will aid in navigating through the game, surviving your encounters, and communicating with other players.

Some child windows can be released from their parents and allowed to float. Floating windows may be dragged to new locations and can often be enlarged to display more detail or shrunk to be placed off to the side where they will serve as information, but not interfere with your interaction with the world. In addition, a window that is floating can be opened and closed independently of the child windows belonging to the same parent window.

Many windows can be resized by clicking on the outer borders of the window and dragging them to make the window larger or smaller in size.

Clicking in the tab on the upper or lower border of any floating window will allow you to drag the window around the screen to reposition it.

In a few cases, windows may have sections within them that may be resized by clicking the borders between sections and dragging them to reallocate space. Columns of information in the Super Group Window and the divider between the upper and lower chat tabs in the Chat Window are just two examples of this.

Detailed mechanics of each window are explained in detail in articles contained within the User Interface category outside of the Players' Guide to the Cities. Additional tips on the use of a few of the windows can be found in the following articles:

Whenever you target an object in the game, a group of four brackets will appear to form a box around the object, calling attention to your active target. Along with the brackets, the target's name, faction, and status bars will appear above the target. This display is referred to as the "reticle". 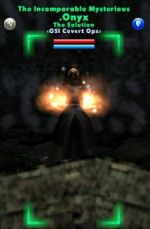 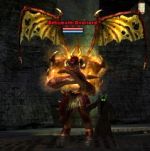 Assisting Against a Hostile Target

Assuming you have the option turned on in the Options Window, you will be able to identify your assist target by locating the enemy with its name and status bars displayed above its head without colored brackets. If you wish to switch to targeting this enemy directly, you may do so with the /assist command.

The reticle will appear in white when targeting either a non-combatant NPC or a character that is currently AFK.